* on weekday orders received by 2pm 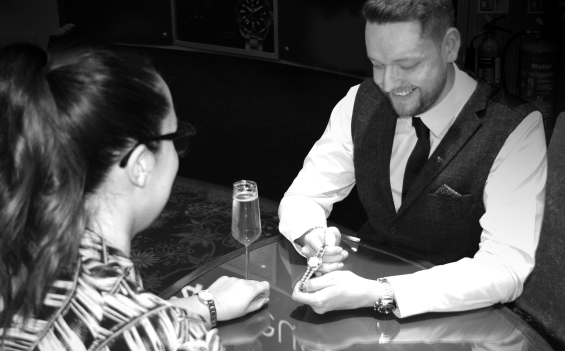 Prefer to try before you buy?

We understand the importance of every purchase you make, that’s why our product specialists are here to help.

This is a limited-edition watch of just 50 pieces produced worldwide, with Peter Jackson having number 37 of these 50.

We are delighted to share with you arguably the most beautiful watch ever produced by Oris. Along with the release of this watch comes the announcement of their continued partnership with the ‘Coral Restorations Foundation’; the world’s leading coral restoration organisation. A watch made from 18-carat gold and limited to just 50 numbered pieces worldwide, this timepiece will become an integral part of Oris’ history and a superb purchase for the sophisticated watch fan.

Oris have built an amazing reputation for their divers’ watches, with the Aquis regularly being coveted for its handsome looks and superb quality build for a great price. This edition is the first time an Aquis has been produced in solid 18ct gold, but don’t be misguided, Oris has retained all the diver’s key features whilst using the precious metal. You can still expect the watch to be water resistant to 300 meters, feature a rotating bezel with ceramic insert, screw-in crown and crown protectors.

The back of the watch showcases a specially etched emblem to represent the foundation and their work. The case back will also feature the watches individual limited-edition number. The other showpiece of this watch is the stunningly rich blue dial; a depiction of the body of water. The hands of the watch are also gold to continue the blue and gold theme throughout.

Inside the case is Oris’ 798, base SW 330-1 GMT automatic movement that has an extra hand to time and additional 24-hours and date window. The watch has an added luxury feel with its navy leather strap that has a rubber coating for added protection. Presented in a special wooden display case this watch comes with a 3-year warranty.

As part of Oris’ campaign, Oris will donate 3 of the 50 watches as part of an auction to further raise funds for the Coral Restoration Foundation. Coral has disappeared by 98 percent since the 1950’s and 60’s when the reefs were at their height of recreational diving.

The relationship with the foundation first started in 2014 and now the next big project is the Carysfort Reefs of the Florida Keys. The plan with the money raised, is to restore the reef over 3 years, tackling an area of 100,000m2. Over the last 40 to 50 years the coral population has declined by 98%.

Restoring the coral is done by using cuttings from the existing living corals in the reefs as they have survived the harsh conditions so they will have more of a chance of growing and continuing to survive the effects of climate change. The cuttings are left to grow in a protected ocean nursery and checked every seven days. One cutting can produce thousands of new hardier corals. Cuttings are eventually taken from these growing trees and placed into the coral reefs to start the restoration process.

Coral is an essential ecosystem to the planet as it provides 70 percent of the worlds oxygen although it only covers 1 percent of the earth’s surface, which is pretty incredible right? It also protects the shorelines and supports fisheries as 25 percent of the marine species call it home.

Sadly, without any action in the next 80 years coral reefs could disappear and become extinct. This is due to climate change causing the sea temperature to rise. Making it one of the most endangered ecosystems on planet earth.

We will try to dispatch your order the same day, and an e-mail will be sent to confirm. We aim to have your order with you in 3-5 working days.

Express Delivery
If you need your item in a hurry, you can select express delivery at the checkout for next working day delivery for £6 or free for orders over £200. Just place your order before 2pm.

Free collection from any of our stores
If you would prefer, you can choose to collect your order from one of our stores. You must bring photo ID with you (i.e. drivers licence or passport), along with proof of address. We will let you know by e-mail when the order is ready to collect.

We want you to be entirely happy with your purchase, however if for any reason you need to return your item, our refund and exchange policy is below. All returns must be requested within 14 days of receipt of goods. During December this period will be extended to 30 days to take Christmas into account.

Please allow 10 days for your return to be processed, all refunds will be returned to the original card used for payment.

For more information please visit our returns page or contact us to speak to a member of our team.